Even if our 15th anniversary is behind us, we still have a bunch of amazing employees that deserve to be known. That’s why we’re starting the second edition of 12 Devs in 12 Months. Until March 2022, you’ll get to meet 12 new talented and friendly members of our team.

This month, we’re introducing you to GUYLAINE BOURQUE, Executive assistant, who has been with us for 3 years.

DESCRIBE YOUR JOB IN A GIF.

WHAT IS YOUR BEST MEMORY UBI?

My first day when I walked through the doors of Ubisoft, which marked my return to a video game studio.
There was also the day I worked with the AC Odyssey team in production and we did the unveiling at E3. It was magical to experience that in the Atrium with the project people. I’ll never forget that feeling of pride for the project people and for the studio.

WHAT LED YOU TO THE VIDEO GAME INDUSTRY?

In 2008, it was the year that a video game studio in Quebec City (which I won’t name ), was hiring for an expansion of their studio. They were looking for a buyer. I figured I couldn’t pass up this opportunity. I met an AWESOME person in HR by the name of Veronique Lessard who gave me a chance and hired me. Zero regrets about my decision.

WHAT WAS THE BEST PROJECT YOU WORKED ON?

AC Odyssey of course was my first time being part of a production team. I’ve always been part of the team that runs a video game studio, but to be on the floor, even if it was brief, and meet a lot of really passionate and talented people was pretty cool.

No traffic in the morning to get me to the studio and also avoid the hurried people who are aggressive and cut everyone off in auto. Obviously, the coffee pot on hand so I can drink way too much coffee. Spending more time outside than possible when the weather is nice. I love taking my lunch hours with my boyfriend, also telecommuting, and having that face with me everyday. 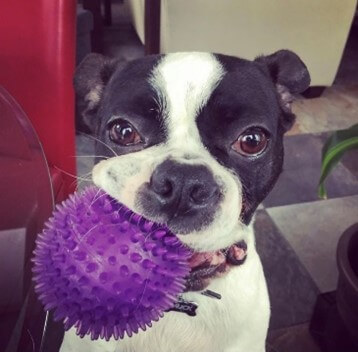 I really miss the people, seeing them in person instead of on a screen. I also miss the energy and the buzz of the studio. I miss having a coffee in the Atrium and seeing someone you haven’t seen for a while.

IF YOU HAD ANY ADVICE FOR SOMEONE WHO WOULD LIKE TO DO THE SAME JOB AS YOU, WHAT WOULD IT BE?

WHICH COLLEAGUE HAS MARKED YOU IN THE LAST YEAR AND WHY?

It has several people:
Nadia Boutin who I think is Wonder Woman.
The production people who “shipped” games from home, in the midst of a pandemic.
The Executive Team, HR Team, and Comms Team who in the past year have worked tirelessly and without losing focus. To the IT & Logistics team and Pascal, who have been at the front of the studio since the beginning of the pandemic.
Bravo to all of you and thank you!!!

WHAT ARE YOU PASSIONATES ABOUT OUTSIDE OF WORK?

Music!!! I don’t play an instrument, but I love going to music shows. I have seen hundreds of shows, of all styles, all over the world. And I love to travel and… ah yes…. TRAVEL. Of course I can’t wait to do after the pandemic.

WHAT DID WORK FROM HOME ALLOWED YOU TO DISCOVER ABOUT YOURSELF?

That I am a person who needs to be around people. The silence of my basement is much less appealing than a buzzing video game studio.

WHAT ARE YOU LOOKING FORWARD TO THE MOST ABOUT GOING BACK TO THE STUDIO?

The people, the getting everyone together, the Faro, the dinners with colleagues, the face-to-face discussions, so many things, but also I’m looking forward to that beautiful, indescribable energy that there is in a video game studio.

[MASHA’S QUESTION] WHAT HAVE YOU CREATED/ACCOMPLISHED WORKING IN UBI THAT YOUR ARE PROUD OF?

By not being in production, I don’t create tools or characters, and I don’t do animation that can be incorporated into a video game.
However, since I joined Ubisoft, what I have created are relationships with amazing people. Whether it’s helping colleagues with an activity, encouraging colleagues to go beyond their ambitions, or listening to a colleague going through a difficult personal time. It is these connections that I have made that make me proud.

WHAT QUESTION WOULD YOU ASK THE NEXT #12DEVSEN12MONTH PARTICIPANT?

If you could go for a coffee or a meal with someone you admire, anyone (living or not), who would it be and why?